HERE ARE THE RULES AND REGISTRATION

This format is divided into three (3) parts:
Ground FX Line:
Consists of 15 positions and is used for Ground Effects like Comets, Mines, Ground Flashes/Flames, Fountains, and Cakes

Aerial FX Line:
Consists of 7 positions and is used for 125mm-300mm Aerial Effects.

Free for All Area:
You can place additional positions and 3d models but only Trusses, and Cranes on the given area.

Deduction List:
1 point - every second over or under the given time
Disqualification - If you edited the format and camera settings except for the free for all area
Disqualification - Registered late or did not send their entry
5 points - for every rule broken

Major Awards:
Haribon Gantimpala - This is the Overall Award that whoever has the highest score from all of the divisions wins the award

Here are the rules for the division in the competition as your reference: 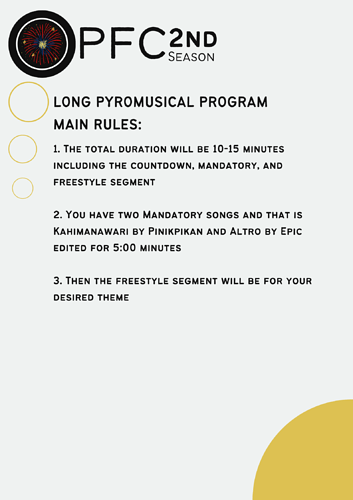 There is one week left to register…

Here is the official rules for this years competition