Special Effects That Would be Cool to Have in FWsim

Cool, does this work on the creative edition or is it a pro-only feature?

It works in the creative edition.

Awesome, thanks for letting me know; this will make show choreographing so much easier!

It’s very impressing how you and I want to add the same things to the software! LOL

Haha yeah! FWsim is so good that now I’m really just going through with a fine-tooth comb and offering suggestions that would push it over the top. For example, another thing I would like to see is more definition of depth for some effects. Ascent stars/effects seem to cross with effects in the same “plane”, even if there are two different positions (one in front and the other behind). Here’s an example from a project I’m working on. The ascent stars are in front of the shell, though the shell seems to overlap the stars. 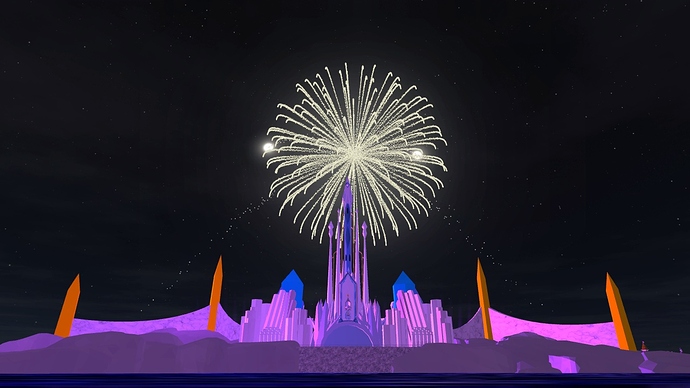 Yes, I can see that! Check out my post here about the things I would like to be added on FWsim, and comment what you thought!

Those of us using it as a simulator wants quite different things from those using it as a tool. It is a hard balancing act to cater for both. Personally, I mainly recreate real world consumer and display fireworks. I want as much creative control and flexibility as possible. Judging from the different tutorials that are already here I’m not the only one.

I would like to build my own library of stars and tails. Stars and tails are different depending on the chemical composition. There is a wide variety of green stars, not only in hue, but in brightness and saturation. I would like a sliding scale for star sizes, instead of the four size options.

I would like to have control over the physics. Currently there is one option for falling leaves. But depending on the calibre of the shell I might want very small falling leaves or very large falling leaves. I would like the ability to make gogetters, flying fish, spinners, lamperes, swimming stars, hummers and so on. If we had access to manipulate different aspects of the physics, we could build some of these effects ourselves.

I would like the ability to add descriptive metadata to the effects that is then searchable in my collection. So, for example I could search for a specific manufacturer, within a specific rise height or all ground effects.

I would like to see differently shaped fronts, like arches, circles and so on. I would also prefer if the point positions were tied to the line shape. Usually you would have, for example, a middle-front with 15 firing positions. Currently you have to set that up as 16 positions (1 line and 15 points). I can easily get up to 60-70 different positions in a show. Often shapes that aren’t lines, which kind of nullifies the stepper tool and makes it difficult to find and keep track of the positions. If you could instead assign a number of firing positions to each line and have the effects snap to them, that would make the setup and workflow easier.

Obviously, most of the suggestions here are for future versions of FWsim, not something that would be in an FWsim 3 update.

When it comes to smaller changes, I would like an angle variation in the cake editor under simulated inaccuracies.

As we can now build cakes in parts, an option for not starting the second part of a cake until the first part is finished. I have multi-effect fountains and colourchanging flames where that would be an improvement.

Being able to insert a pause would also be welcome, even though you can make this as an effect.

A proper V-pattern should be included. You can make it with the Z-Shape, but you can also do that for the W-shape and that is in there as a stand-alone.

If it is possible, an option for using reverse fusing and double fusing on individual cakes in the show editor would be nice.

Having comet and mines measured by calibre like shells. It just seems more consistent to have them categorized the same way. Also, would it be possible to zoom the camera out in the effect editor when using the mine component? Whenever I edit the mine component, I can only see about half the effect dimension. And the effect itself only seems to rise part of that distance. But it disappears out of view so I can’t be sure.

And of course, what others have already suggested like smoke trails, wind, fire and so on.

Thank you @baalduru and everyone else for your thoughtful and detailed ideas!

Your ideas will be taken into account as we plan future releases.

What about colorized smokes, it may useful as daytime fireworks displays

Created a new thread for this (as this is super important), but will also post here so I can have all my suggestions in one place:

Hello! Just 2 quick suggestions for a future updates in order of necessity:

1) Allow creative users to use CTRL+Z and inserting cues by burst time (Extremely necessary; this should be standard for everyone, not just pro users) .

Hopefully @Lukas can make this happen sometime in the near future; especially (1) .

I’m not sure if this is the right place for it, but I think it would be really nice to be able to group positions. So that you can only have a single firework in your timeline and have it display on multiple positions, this avoids clutter on the timeline